Friday started with oatmeal for breakfast at 7:30a then driving down the road 13 minutes to Grjótagjá, the cave from Game of Thrones, Season 3. Its a beautiful day at 47 degrees and not a cloud in the sky. There were flys everywhere as we walked down the trail which wasn’t the best. We were disappointed with this one because here is the picture they advertise below, and then its what we actually saw. The cave was too flooded to climb down inside. 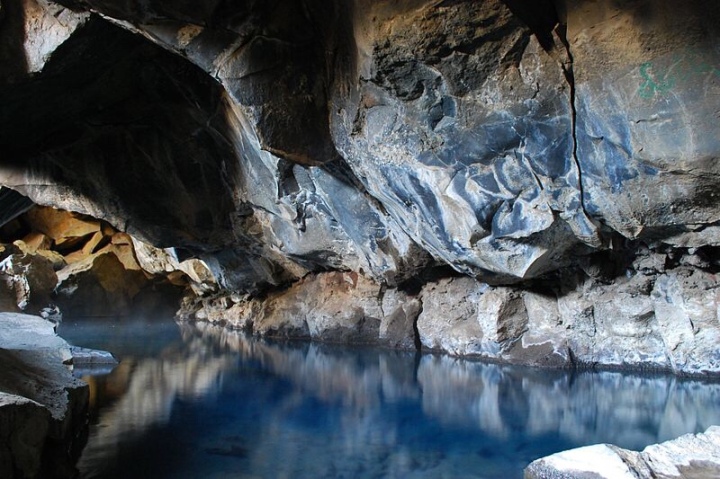 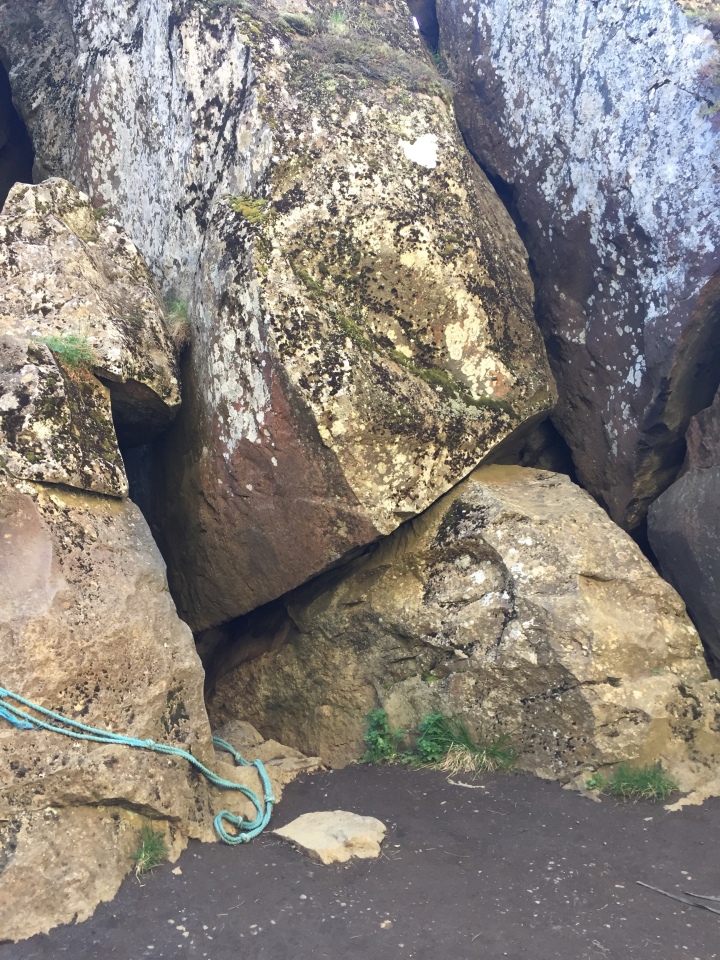 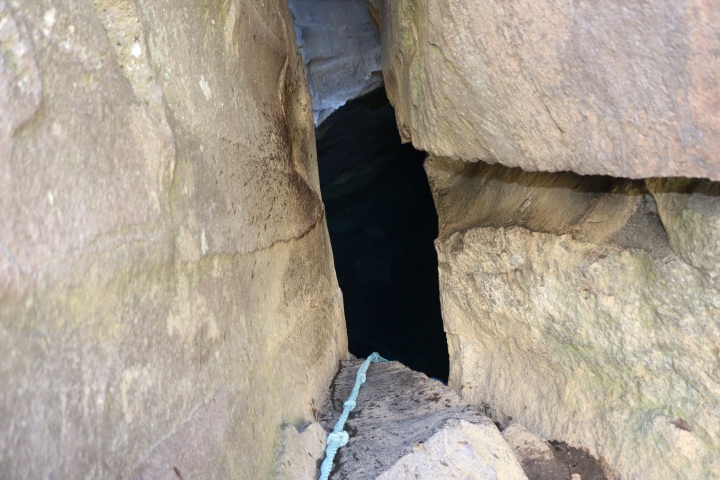 No worries, however, because 4 minutes down the road were the Myvatn Nature Baths. This was another hot spring, like the Blue Lagoon. We got there right as it opened at 9:00a and it was great with only a handful of people there. The only difference was that this one had a strong sulfur smell, and the water was a bit slimier than the Blue Lagoon. We had an awesome time, however, as it had the most gorgeous view of the mountains. 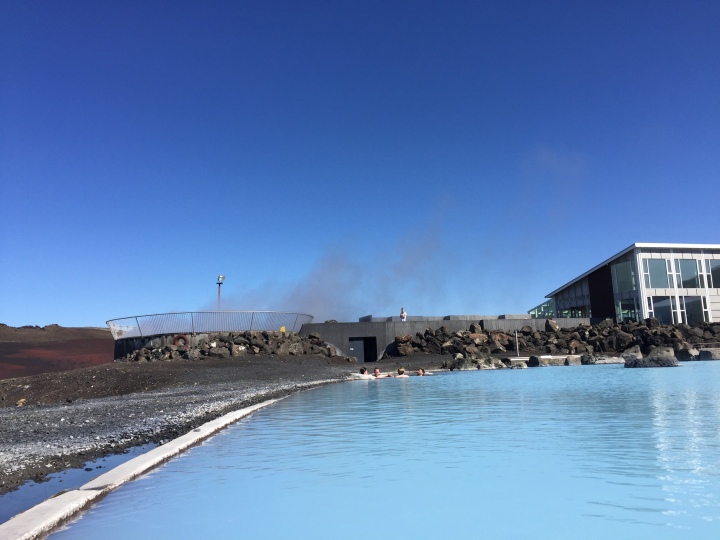 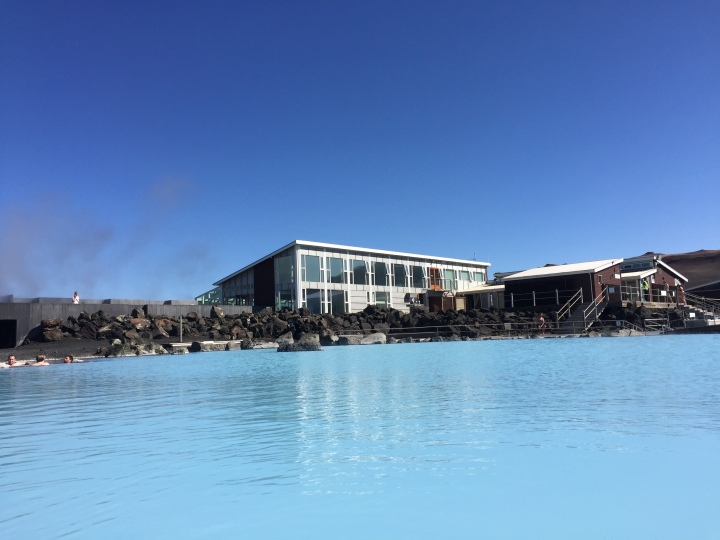 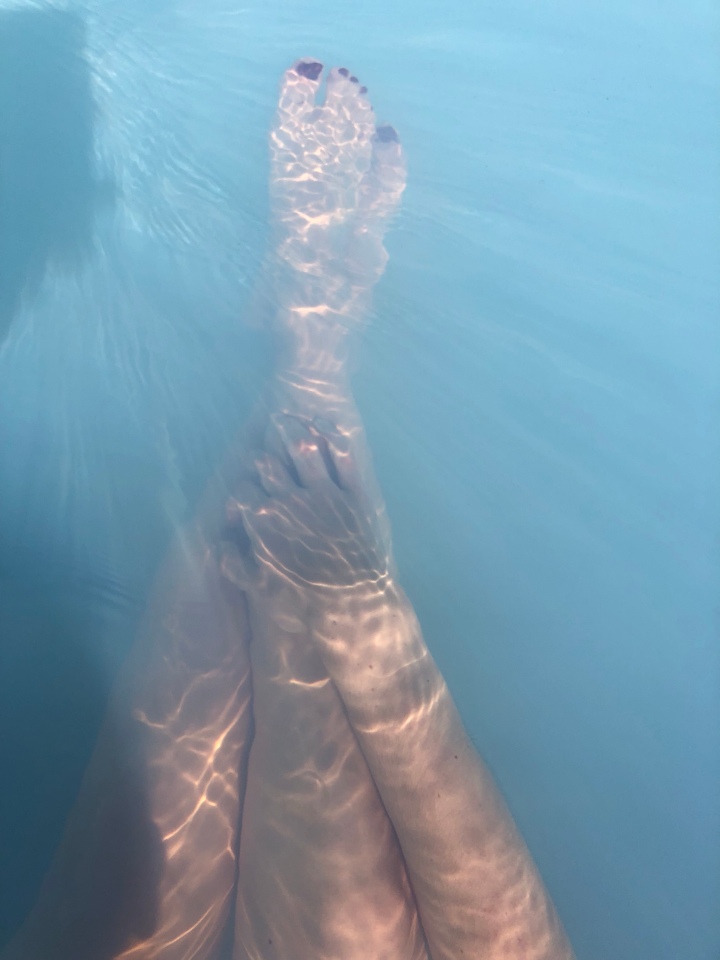 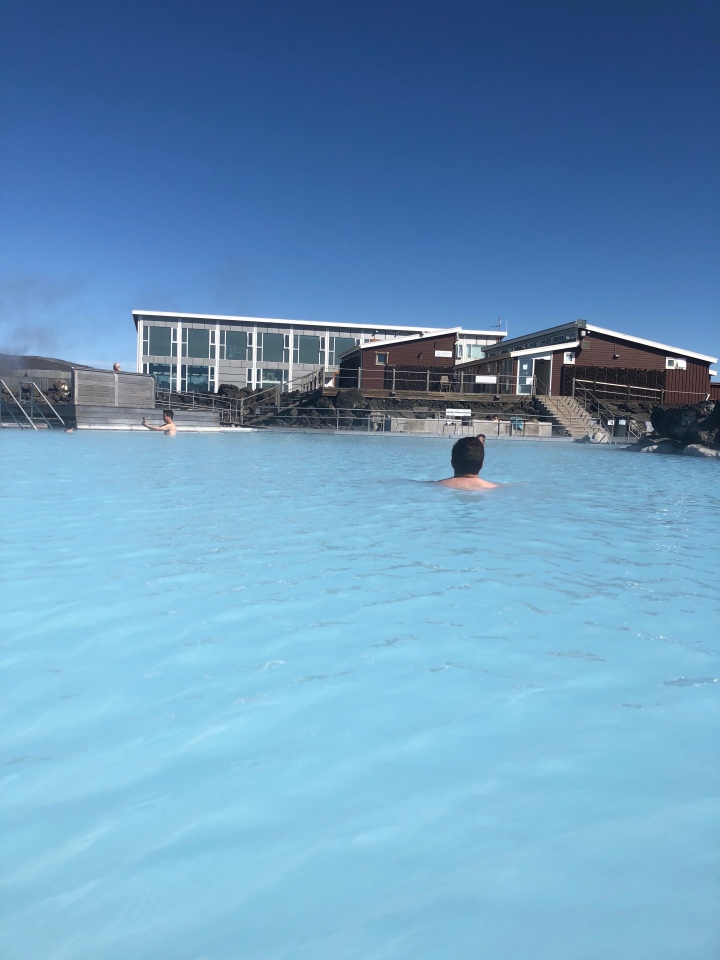 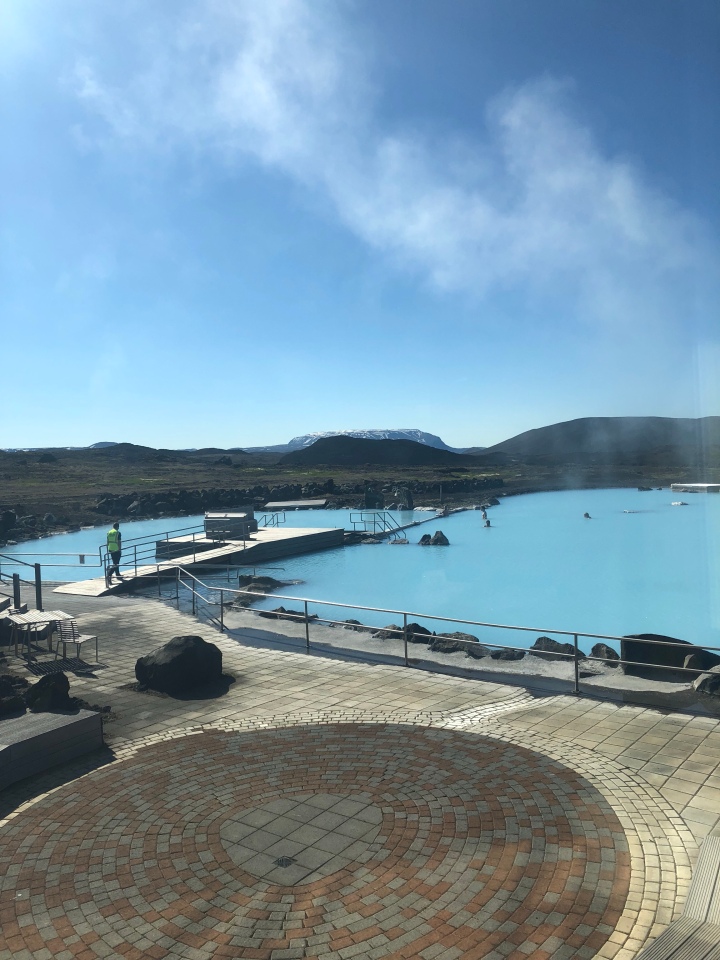 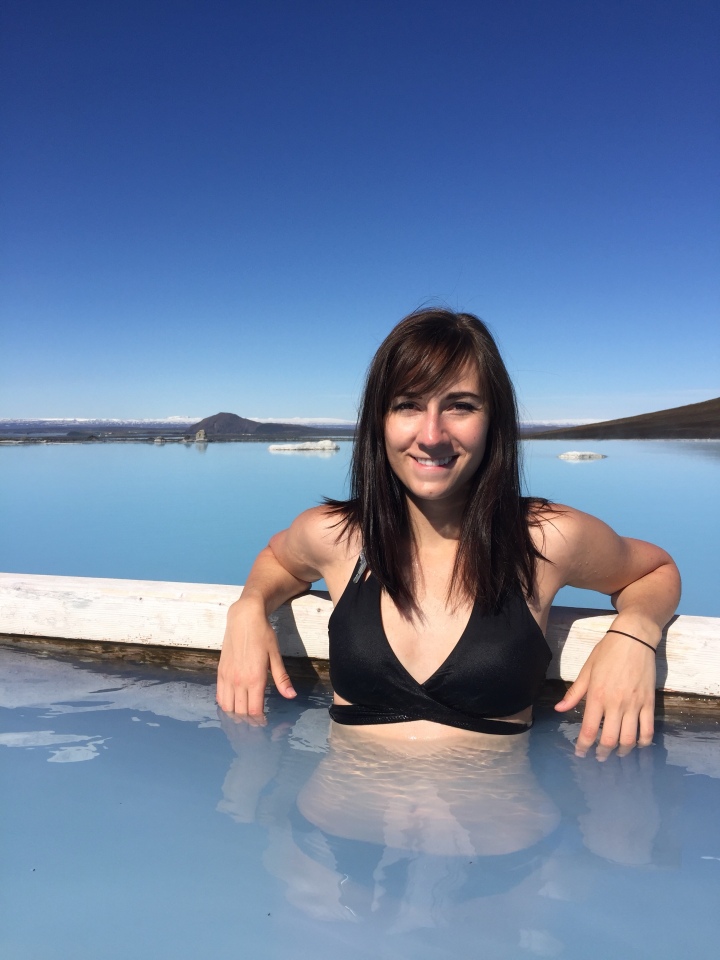 After being there an hour, we packed up and drove 46 minutes to Godafoss. Godafoss is closely connected with one of the most important event in Icelandic history, the conversion to Christianity from heathendom or “the old custom” in the year 1000. In the year 999 or 1000 the lawspeakerÞorgeir Ljósvetningagoði made Christianity the official religion of Iceland. According to a modern myth, it is said that upon returning from the Alþingi, Þorgeir threw his statues of the Norse gods into the waterfall.

This water here was more muddy than any of the other waterfalls we’ve seen so far but we could park right up close and walk the rocks along the sides to get a great view right up close. 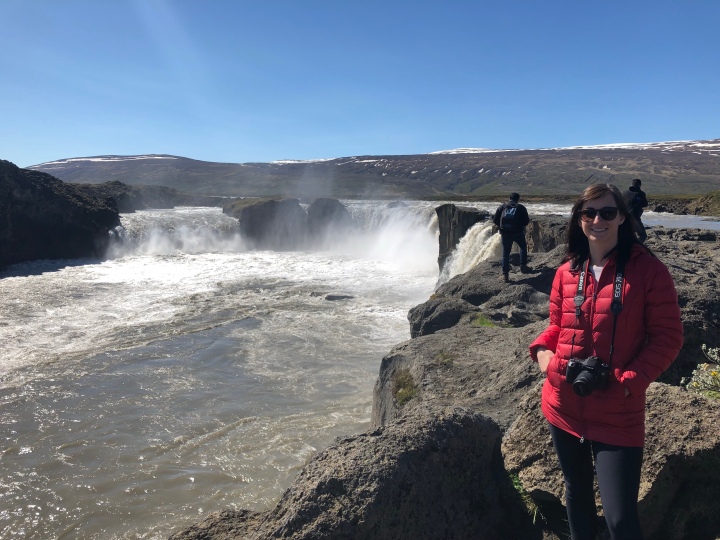 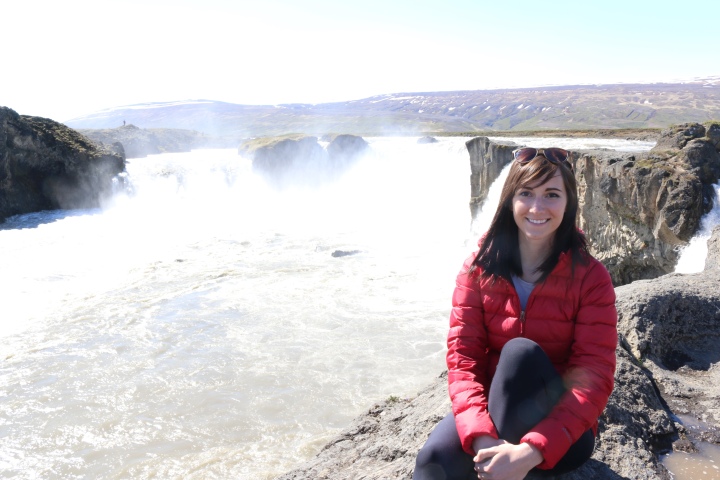 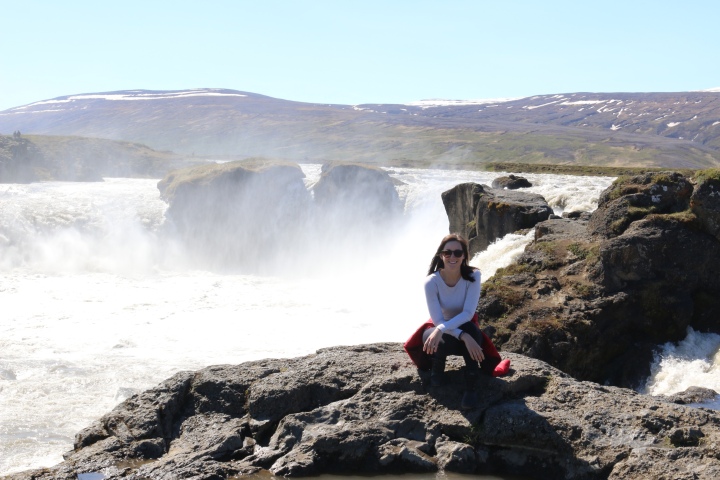 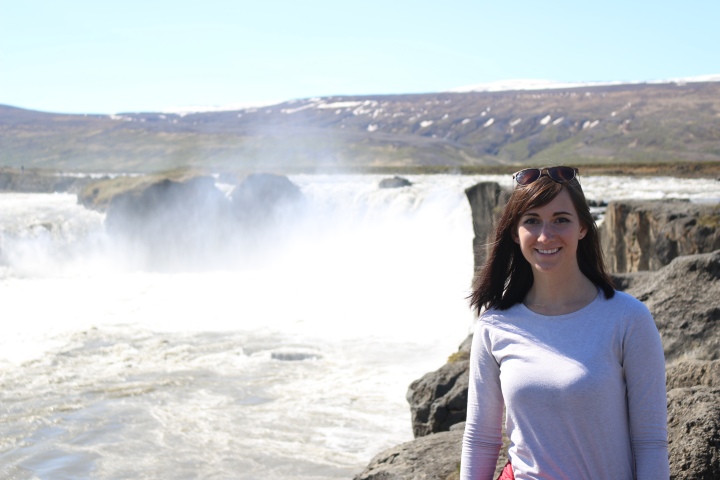 We snapped a couple of photos, then went back to the car to eat our lunch of ham, chicken or roast beef sandwiches we bought at nature baths, bananas, chips and water. We then drove an hour west to the town of Akureyri. Akureyri is the fourth-most-populous city / town in Iceland by population (18,041). We stopped at the Hof Cultural and Conference Center to stretch our legs and for the bathrooms. It was a awesome, circular building with a tourist information center and awesome small art gallery full of landscape watercolors and modern art. We then got back to the car and drove another 2 hours to the town of Hvammstangi. 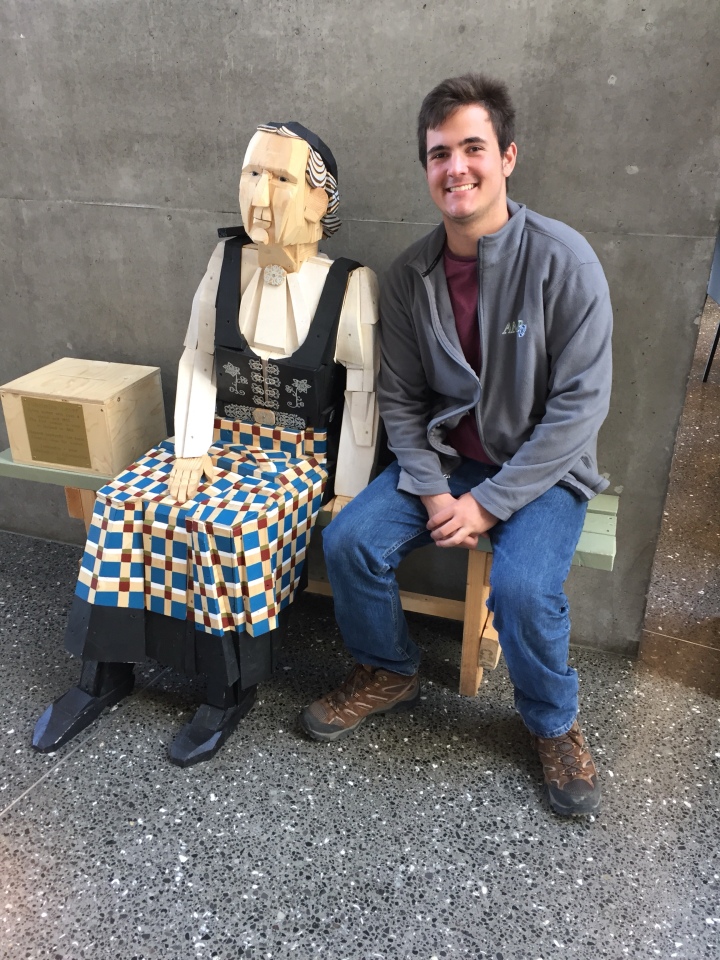 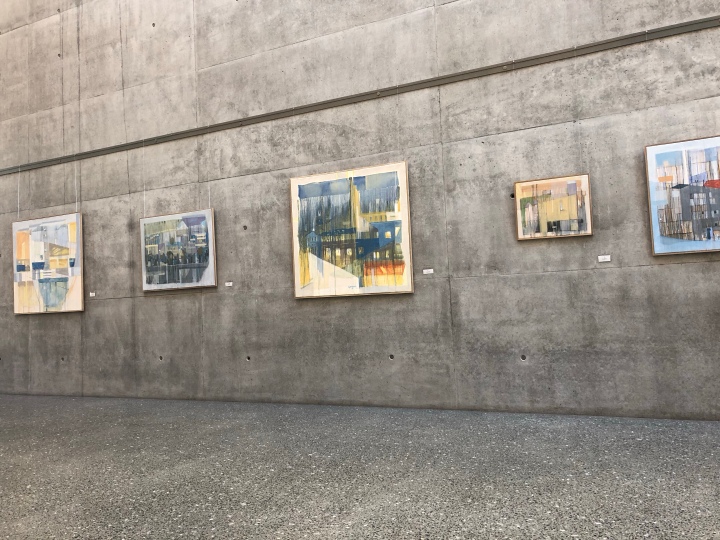 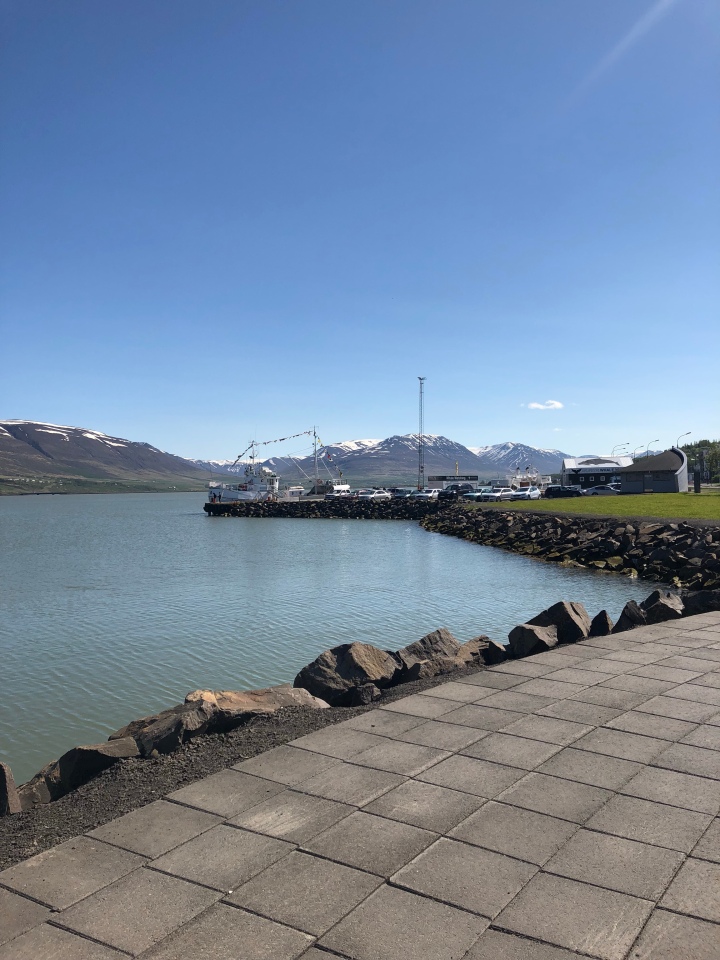 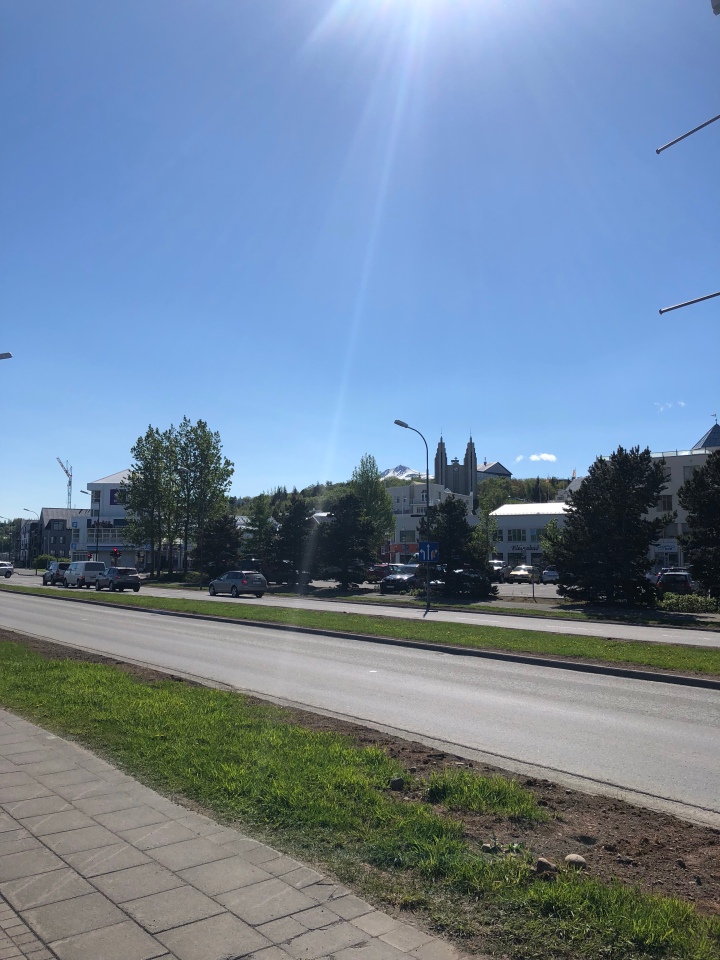 We are staying the night at their campground, in a ‘cozy cabin.’ It is actually bigger then it looks, with two beds, sofa couch, TV, kitchen, kitchen and bathroom/shower. We enjoy a lazy night before the drive back to Reykjavík. 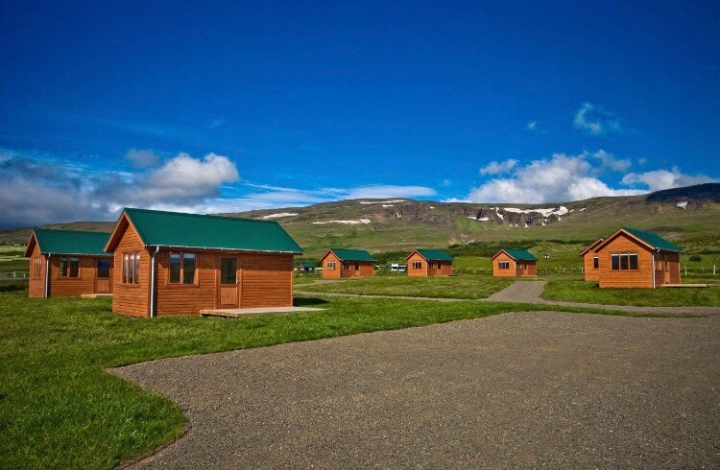 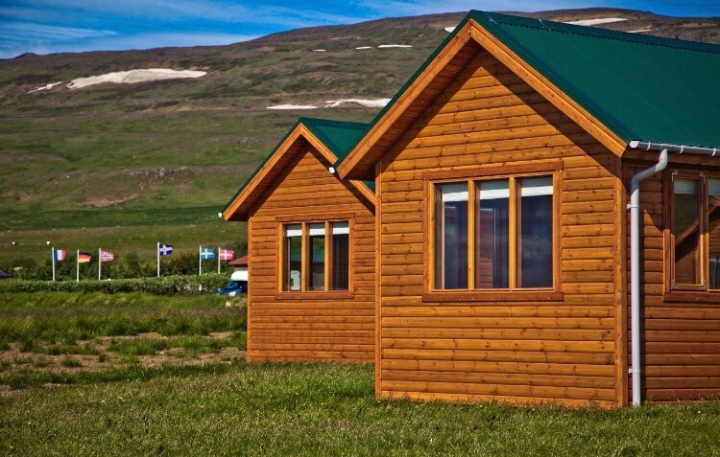 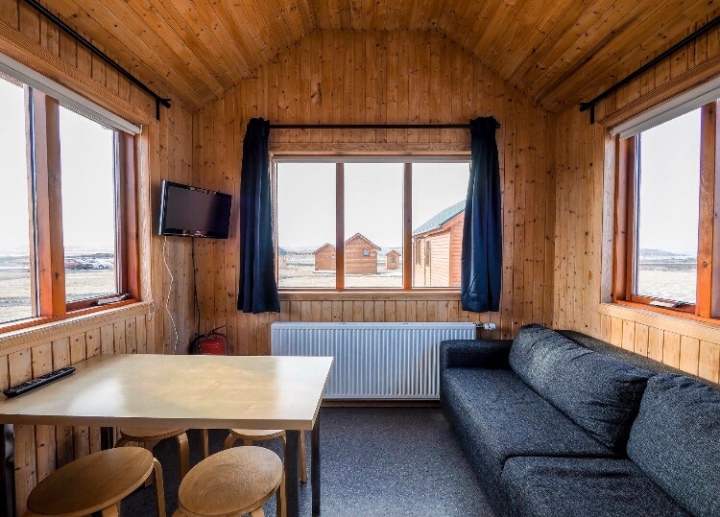 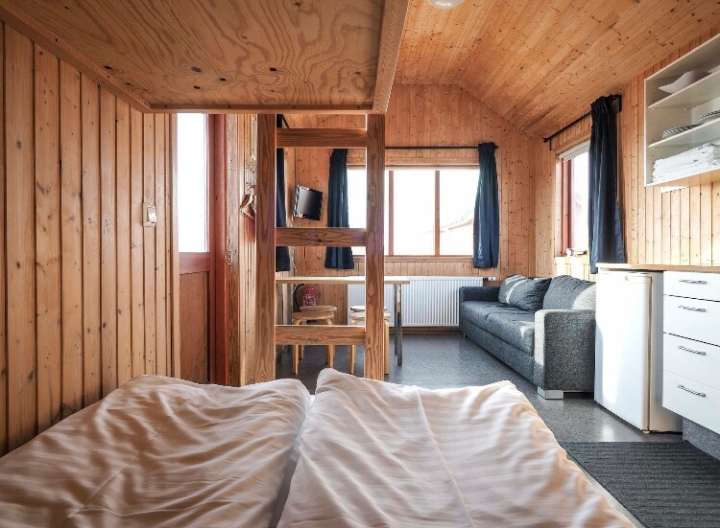 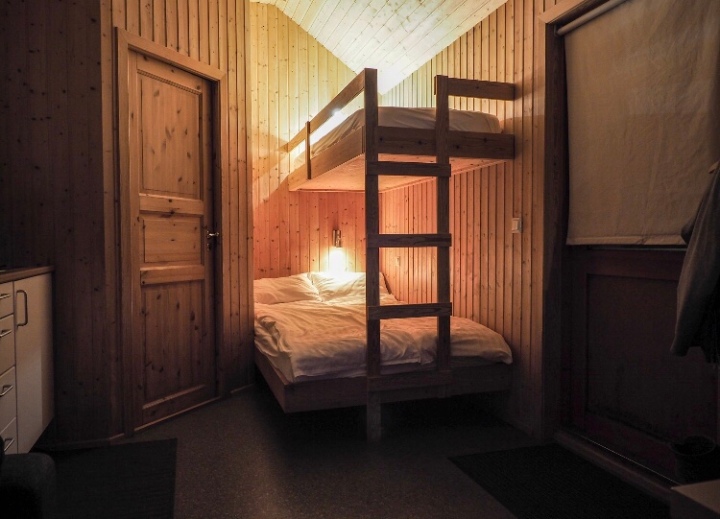 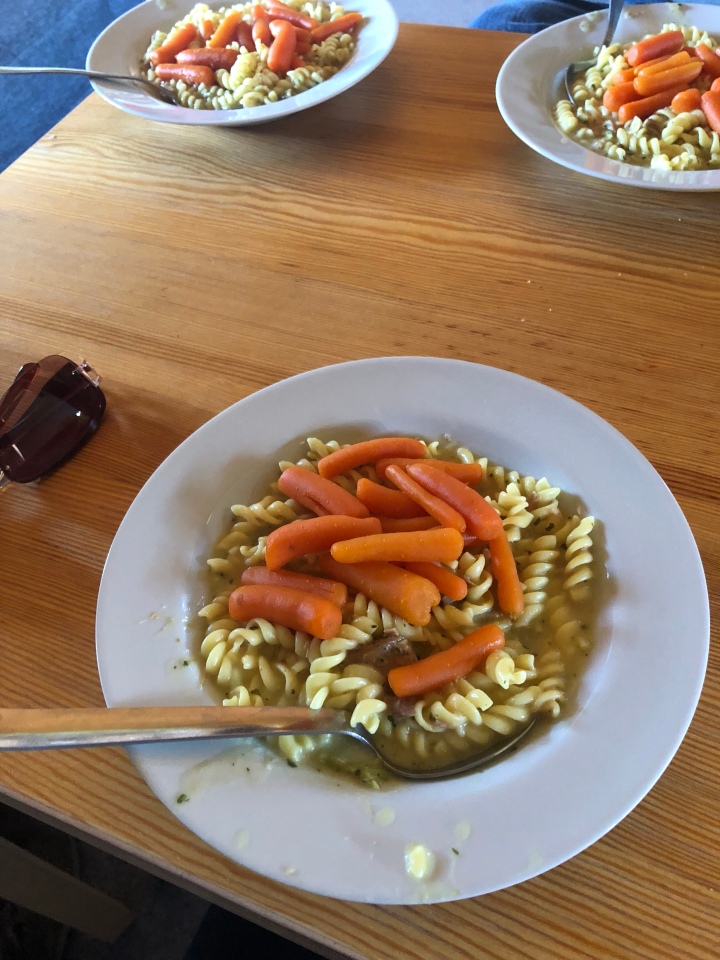 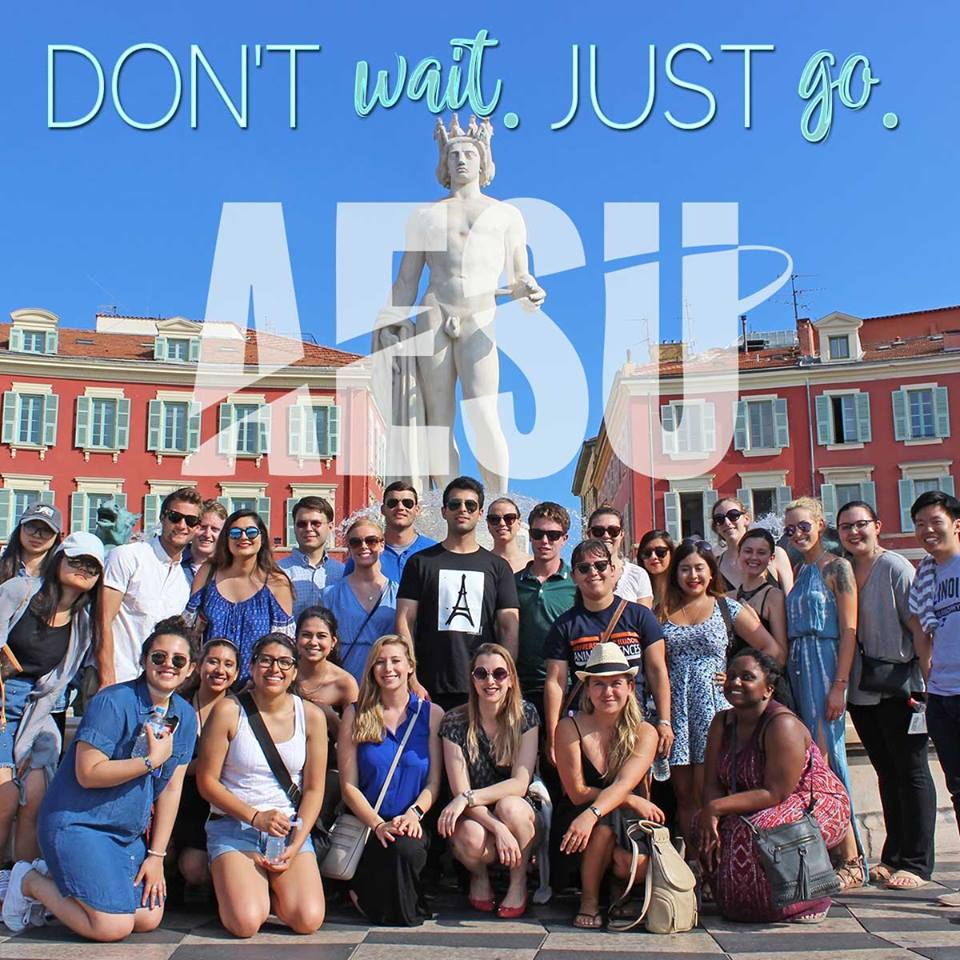